Doordarshan is an autonomous public service broadcaster founded by the Government of India, which is one of two divisions of Prasar Bharati.It is one of India’s largest broadcasting organisations in terms of studio and transmitter infrastructure, having been established on 15 September 1959. It also broadcasts on digital terrestrial transmitters. DD provides television, online and mobile services throughout metropolitan and regional India, as well as overseas, through the satellite network.

Doordarshan – literally, a glimpse of all afar- is the face of and a witness to India’s metamorphosis to a global leader in digital communications.

Interestingly, the illusory cyber paths that crisscross homes and streets and represent the voice a billion-plus Indians today, actually began with a modest experiment in public service telecasting on September 15, 1959. The makeshift studio and its players beamed their voice and visuals through a small transmitter, daring to dream of becoming the prime vehicle of development of a nation that had shrugged off its yoke of slavery just over a decade earlier.

The experiment became a service in 1965, when Doordarshan began beaming signals to reach television sets in living rooms in and around the country’s capital, New Delhi. By 1972, services were extended to Mumbai and Amritsar and then on, to seven other cities by 1975. All this time, it was part of the national broadcaster, All India Radio. On April 1, 1976, it transited to become a separate Department in the Ministry of Information and Broadcasting, though still serviced by All India Radio, especially for its news.

Since then, the organisation has grown to cover the length and breadth of the country, painstakingly caring for the interest of all linguistic, geographical and cultural groups and promoting social, cultural and educational development of the country though an array of transmitter networks equipped with studios and facilities to produce programmes even in regional languages.

In doing so, the country’s prime television service provider has also become the engine for celebration of its diversity and the iteration of its unity. It has been able to do so because it has no single market to pamper – because it is the harbinger of news and information services to every geographical community, all occupational group and each assemble of interests.

At Doordarshan, engineering blends with creativity to make it a role model as a matrix of genres evolve from a spread of centers, an array of transmissions and hundreds of studios. This fusion of modern digital engineering hardware and the software of a three tier programme service spreads nationally, regionally and even locally.

Over the decades, the results of this melt of engineering and creativity have captivated million who would be glued to television sets to watch anything from news to cricket match telecasts, exhibitions of art, culture and Bollywood to education on the arts and sciences alike, from catering to a vast farming community to catalysing the growth of industry and commerce. 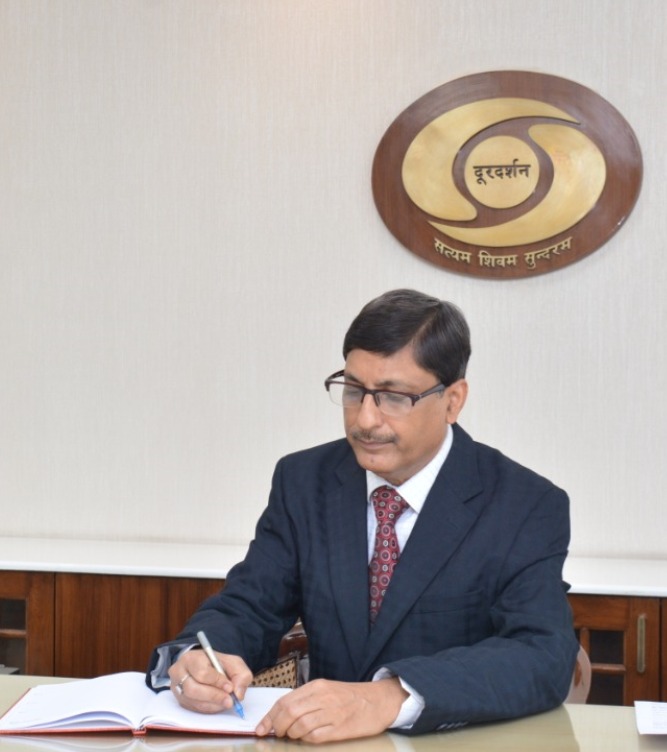 I sincerely express my heartfelt gratitude and sincere thanks to every viewer of Doordarshan network for all their love and support. Doordarshan is one of the largest Public Service Broadcasters in the world and today Doordarshan is in its transformation stage. It has been an immense joy to see Doordarshan grow beyond the set expectations.

Generations of Indians have grown watching Doordarshan and it is indeed a part of our DNA. When it comes to the credibility of News, dissemination of public service information, providing wholesome entertainment and instilling scientific temper, Doordarshan has always stood first.

I also take this opportunity to thank my entire team for making Doordarshan reach one and all. Once again a heartfelt thank you to all our viewers for their constant love. We look forward to your continuous support.