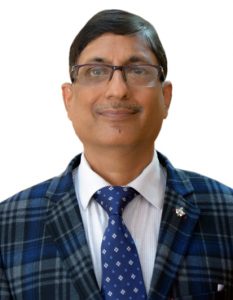 Sh. Mayank Kumar Agrawal, Chief Executive Officer, Prasar Bharati, is a senior officer of the Indian Information Service (IIS) of 1988 Batch. He has a long experience of working in various Ministries and Departments of Government of India and Media Units of the Ministry of Information & Broadcasting including All India Radio, Indian Institute of Mass Communication, Press Information Bureau, NACO, Ministry of Health & Family Welfare.

Over the years, he has specialized in Government Communication. He has widely travelled and has participated in several national and international conferences. He has been part of the
Prime Ministers’ media delegations in the past to the USA, Russia, Sri Lanka, Zimbabwe and Maldives. He has been widely appreciated for his work on prestigious Red Ribbon Express Project in 2007 and 2009 for spreading awareness about HIV and AIDS in the country. While in
NACO, he closely worked with UNICEF on production of television serial “Kyunki Jeena Isi Kaa Naam Hai”. In addition, he remained associated with several news documentaries andshort films.