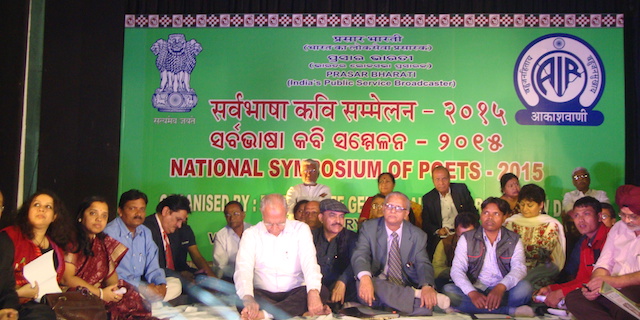 Introduced in 1956, the Sarva Bhasha Kavi Sammelan (National Symposium of Poets) is an endeavor to provide a creative platform to national integration and linguistic harmony through mutual interaction and coordinated presentation of the best in contemporary poetry of all Indian languages. Its uniqueness is underlined by the fact that it is the only programme of its kind, wherein eminent poets 22 Indian languages now come together on one stage to offer their creative best. Poems in all these languages are presented by the poets themselves before an invited audience, followed by the rendering their Hindi versions translated by eminent poets of different languages. A two –hour recording of this programme is broadcast on the national network of AIR on 25th January, on the eve of the Republic Day at 10 P.M. At the same time, regional language versions of this programme are broadcast from concerned AIR stations. Thus, this programme reaches across the length and breadth of the nation.

In 2005, four new languages, namely, Dogri, Mathili, Santhali and Bodo were added to the list of languages taking the total to twenty two languages.

This programme is a reflection of the rich cultural and literary shared heritage of Indian languages, incomparable with any other programme in its status and grandeur.